Day 5 with Jake and Lyndsay involves one of the most popular lakes in Canada -Lake Louise:

The last two lakes that we plan on paddling are the most popular: Lake Louise and Moraine Lake (why we left them until the holiday weekend, who knows).  Because of this, one must arrive extremely early if one wishes to beat out all of the tour buses and endless number of people that visit daily (but keep in mind they are popular for a reason – they are world class).  Our plan for today was to wake up at 6am and head out to paddle Moraine Lake,  however, we were too tired to get up early this morning so we chose to make new plans.  On a whim, we decided to head to the town of Banff, AB, – a big time ski town about 45 minutes southeast of our current location (Lake Louise).

We ate breakfast at a neat local restaurant called Melissa’s where we discussed some awesome local spots with the waiter who recommended we paddle Bow River.  We didn’t know what to expect but took his recommendation and found a local public dock in town to launch and paddle Bow River.  We started by heading upstream – the current wasn’t too strong but the head wind made it a tough paddle in that direction.

The color of Bow River was a beautiful emerald green similar to the other lakes and rivers in the area.  Although the paddle upstream was tough we knew we could basically just float back to the dock so we pushed forward for about an hour.  There were great views along the river including an enormous mountain with flat iron peaks that popped up several times during the paddle.  The views already made the paddle worthwhile. 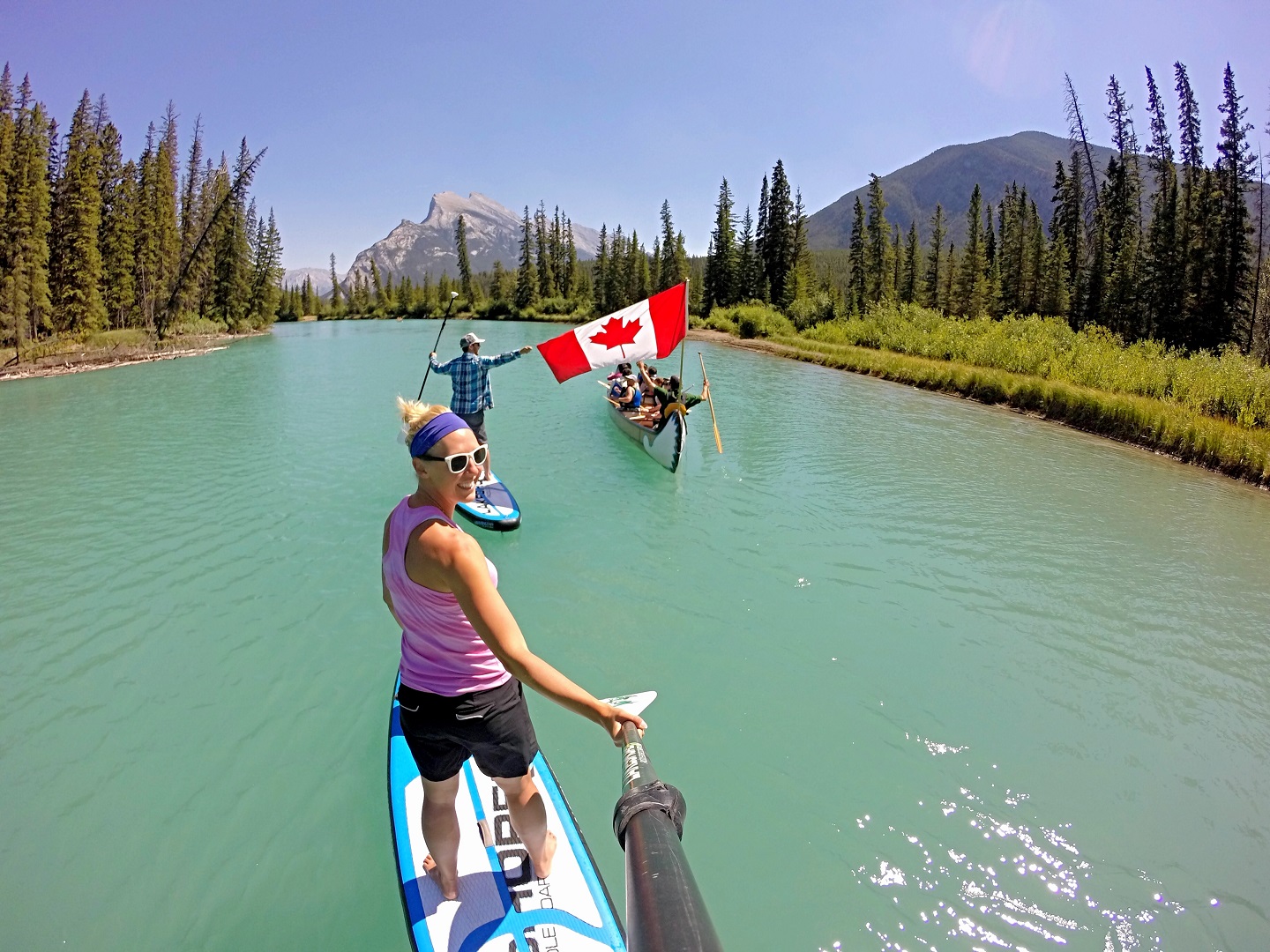 Once we turned around and headed back downstream (yay!) we passed by a canoe full of tourists on a guided river paddle.  Jake had some fun with them and held open the Canadian flag on the back of the canoe while many of them took pictures.

After passing the canoe and continuing back towards the dock something caught Jake’s eye from the shore.  After quietly getting my attention, I looked over to find a young elk eating right on the edge of the riverbank (!).  I quickly paddled over and took as many pictures as I could.  I easily came within 10 – 15 feet from him and he didn’t seem to care that I was there at all.  He was only concerned with eating his lunch and gave me a look every now and then.  I watched him for several minutes and then decided to head off and let the poor guy eat in peace. 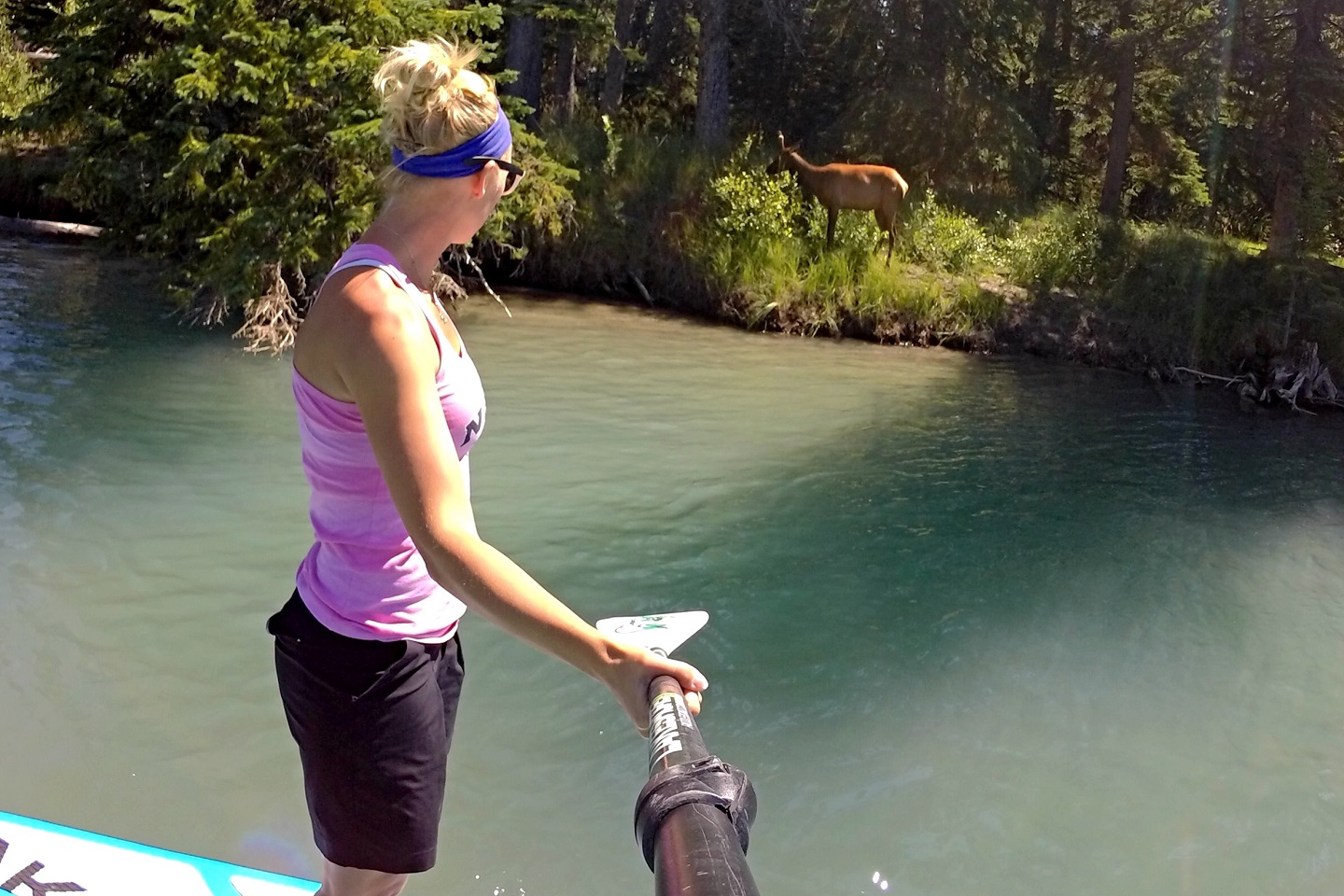 After our elk encounter our paddle was pretty much over (I mean how do you top that anyways?).  We packed up our boards and headed to check out the Bow River Falls, which were just down river from where we launched our SUPs.  We had to hike down a short sketchy trail but managed to catch a great view of the beautiful waterfall on Bow River. 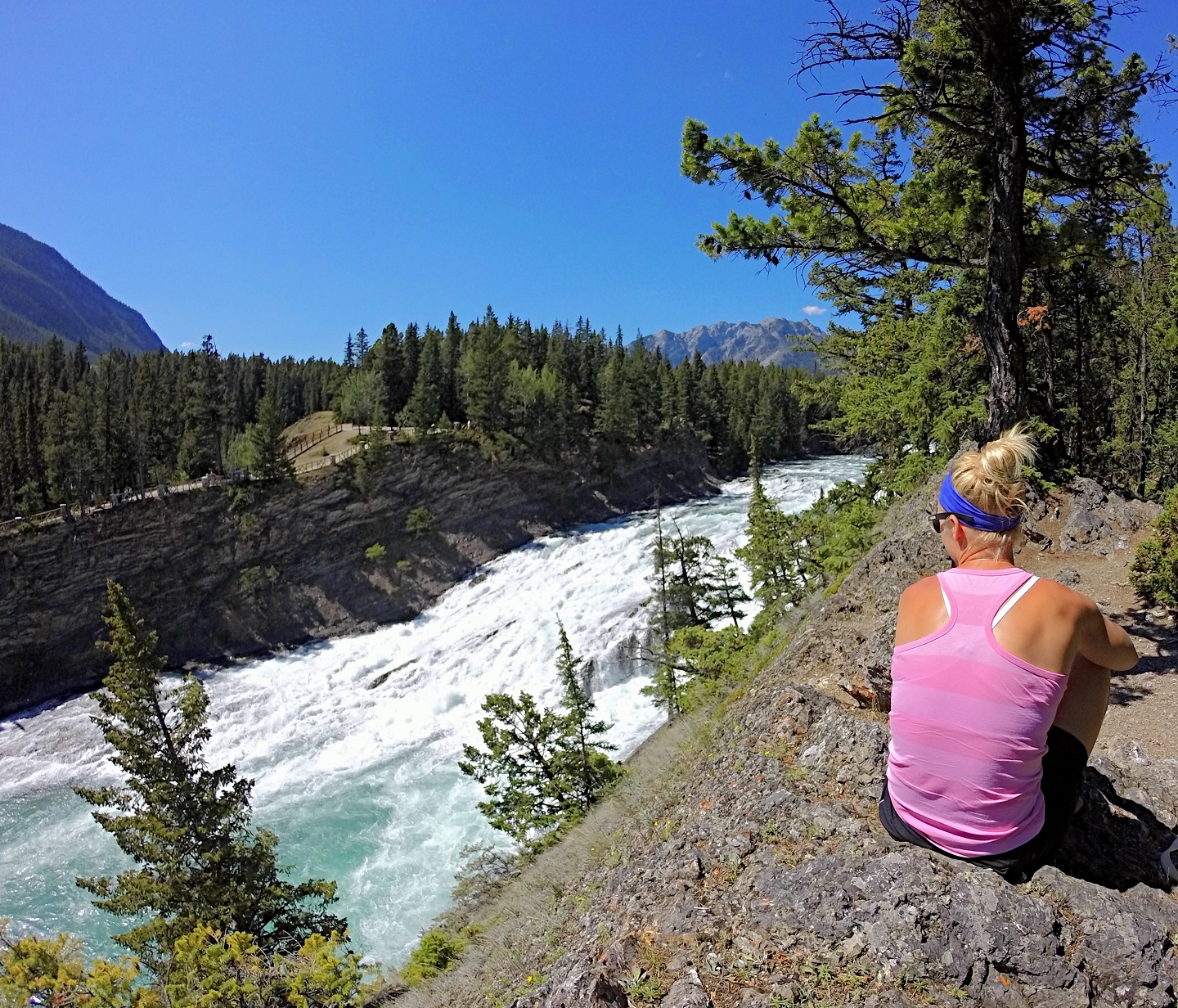 After a great morning, Jake and I took a break to drive back to Lake Louise (the town) and check in to our hotel to relax for a few hours.  We decided to try to paddle Lake Louise (the lake) around 7pm hoping to arrive after most of the tourists have left for the day.  We chose the perfect time – as we began the short drive up the road to the lake, we passed an endless stream of cars heading away from the lake.  Although there were still many people present at the lake, we were able to find a parking spot with no problems.  We grabbed our boards, headed to the shore and started pumping them up for the second time today (I will admit, twice in one day is tiring).

For those who are not familiar with Lake Louise, it is easily the most visited lake in the Canadian Rockies with over 10,000 visitors daily.  As such, it has become fairly commercialized with a gigantic hotel and canoe rentals.  As we launched into Lake Louise near the end of the day, we hurried to get to the opposite shore so we could get away from whatever busy activity was left.  As we neared the opposite side of the lake it occurred to us we were the only ones on the lake (always a good thing!). 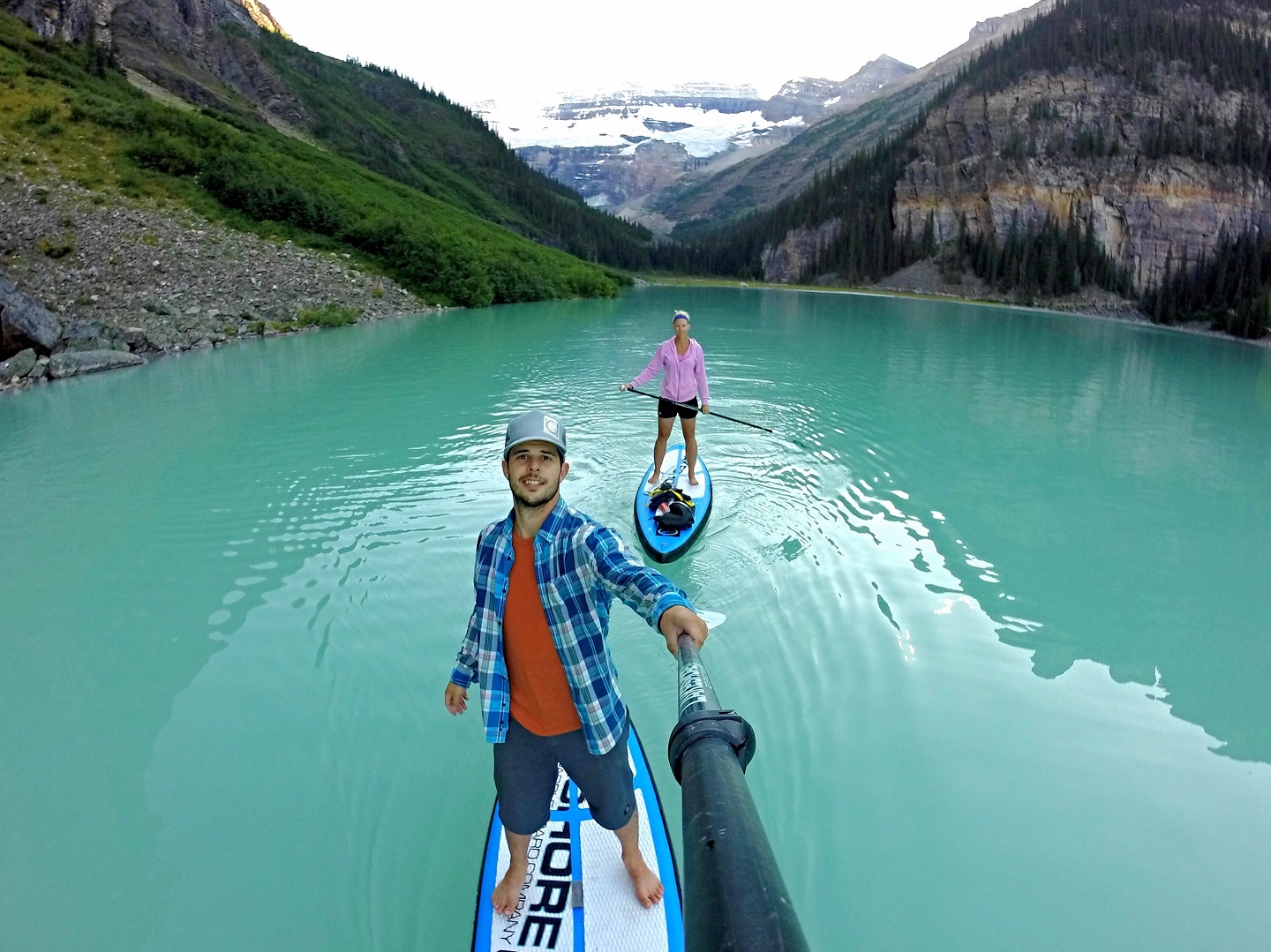 We docked on the far side to take a few pictures and check out the glacier river that fed into the lake.  At this point we realized just how cold Lake Louise is.  Although all of the lakes we have paddled so far have been glacier fed, we have had no issues wading around in any of them with the exception of Lake Louise.  Lake Louise was cold to the point where you couldn’t even really put your feet in the water at all without them freezing up immediately. 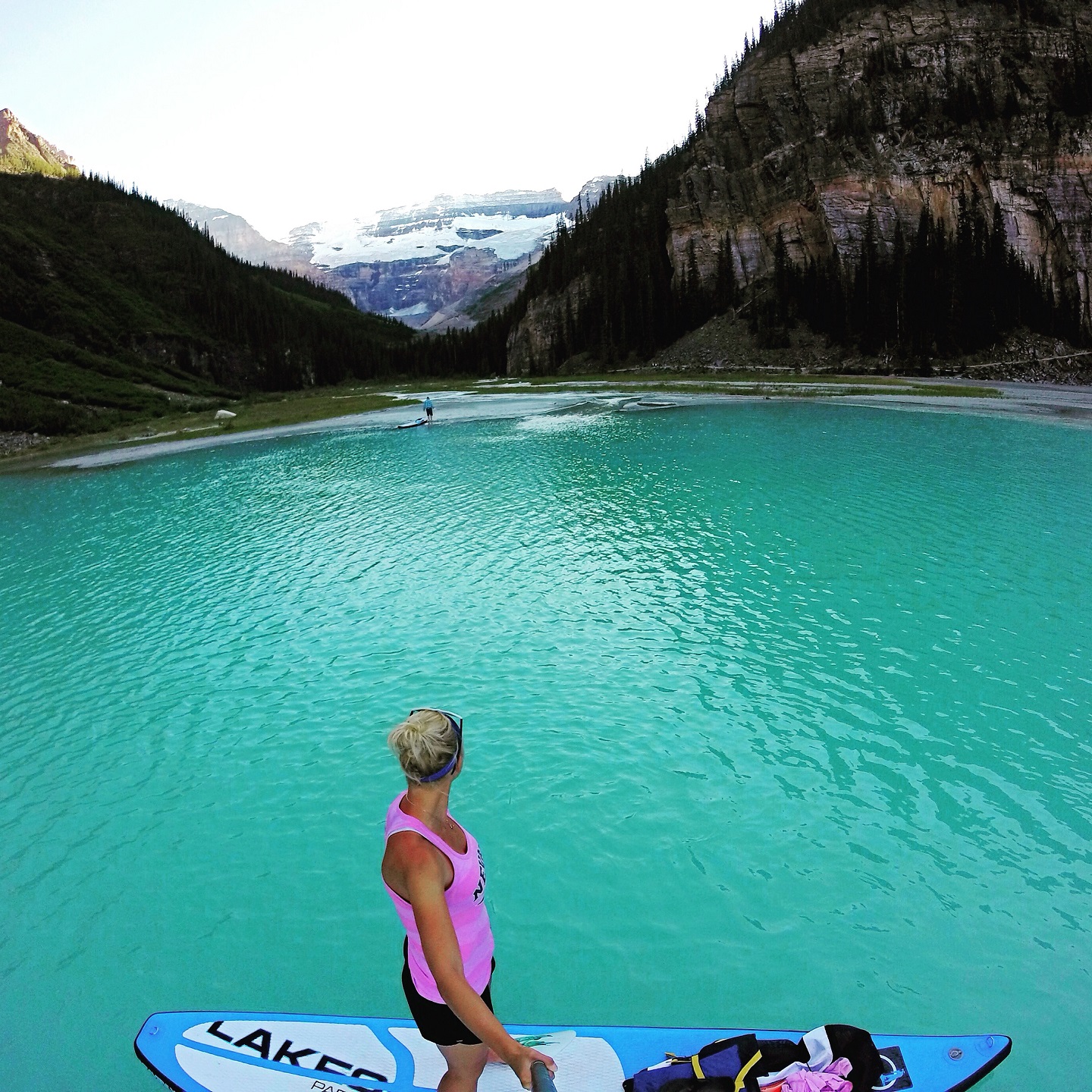 The color of the lake was similar to the others – each lake seems to be its own shade of emerald green – and it had very little visibility due to the excessive amount of ‘rock flour’ that came down from the enormous glacier that feeds it.  The air was a little chilly on this paddle since the sun had pretty much set behind the mountains at this point (even with the sun the high in the Rockies was around 75 °F/23 °C so it never got hot), but we still had a fantastic paddle on a beautiful lake.  Even though our plans changed for the day, it turned out to be amazing after all.  We headed back to the hotel, had a beer and are off to bed to make SURE we get up early to visit Moraine Lake tomorrow (apparently the mother-of-all-lakes).