Closed basin watersheds know no ocean. Precipitation that falls within the boundaries of a closed basin can only leave via evaporation or infiltration into the soil and groundwater. These watersheds have no ocean-bound rivers and the nature of their geology prevents significant groundwater from flowing out of the basin. North America’s Great Basin is the continent’s largest region of closed basin watersheds and is best known for its arid climate, mountainous landscape, gold mining, and gambling. Flying over or driving through the Great Basin, the words ‘paddling destination’ do not necessarily come to mind. 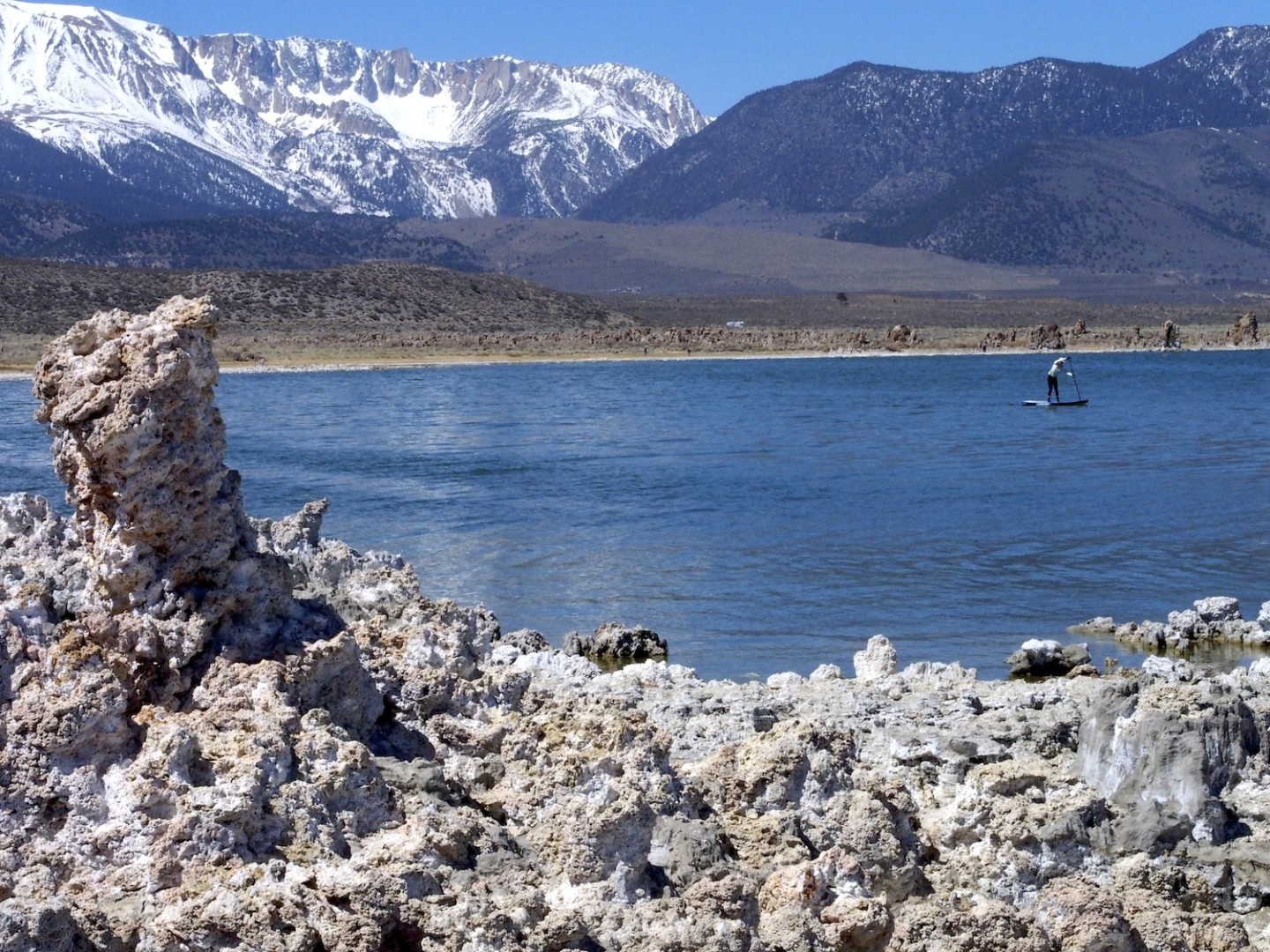 Look carefully and your eye might catch the certain twinkling of sunlight reflecting off a body of water. Looking closer still, you will see an unlikely juxtaposition of expansive cobalt waters against an otherwise waterless landscape punctuated by endless mountains and scrubby vegetation. Subtle hues of orange, brown, pink, and khaki color the scene. These lakes are not man-made reservoirs; they are the few remnants of past times when lakes covered many now dry valley floors. Such ephemeral lakes are called ‘pluvial lakes’ from the Latin ‘pluvia’, meaning rain, and the name stems from pluvial periods that are characterized by increased average precipitation lasting on the order of tens to thousands of years. Snow is an extremely important component of northern Great Basin precipitation during the winter and spring while the central and southern portions rely heavily on summer monsoon rains. Many of these periods were also associated with lower average temperatures driven primarily by variations in the Earth’s orbit around the sun and thus changes the amount of solar energy reaching the Earth’s surface. These variations occur in cycles (called Milankovic Cycles) and are the fundamental causes for the development of Earth’s great glaciations, wherein massive continental glaciers grew to cover significant portions of North America, Europe, and Asia. One such period in geologic history is known as the Pleistocene Epoch, beginning 2.6 million years ago and continuing to today. The alterations of Pleistocene glaciations on the landscape are readily evident in many different forms as moraines composed of rock and soil moved and deposited by ice as it flowed under the force of gravity, the steep headwalls of mountain crests called mountain cirques, massive piles of glacial dust known as loess (pronounced ‘luss’), and in the case of the Great Basin, pluvial lakes. The largest alpine glaciers were located in the ranges bounding the Great Basin, the Sierra Nevada to the west, and the Wasatch Mountains to the east. All told, evidence of active glaciation has been found in 40 Great Basin ranges with at least as many pluvial lakes. 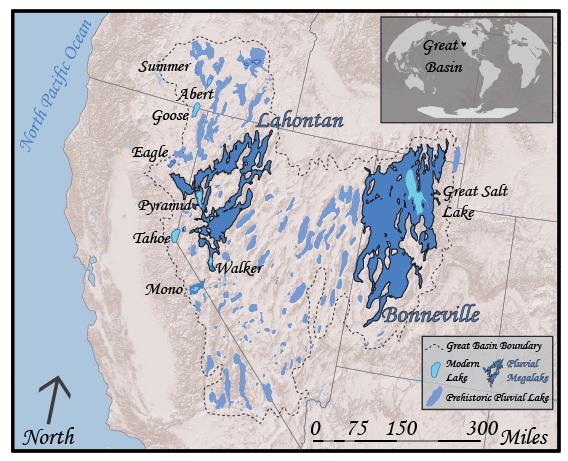 Once widely distributed throughout the Great Basin, only a few of these closed basin lakes remain today. Several others are more marsh than lake, but all are rich troves of local biodiversity and particularly important for bird migrations. In the highly alkaline waters of Searles and Mono Lakes, USGS and NASA researchers identified bacteria that metabolize arsenic rather than phosphorus. This fundamentally changed our perspective about life in the universe. Planetary environments once thought to be too harsh to harbor life could actually be where life originated.

Of the remaining modern pluvial lakes, the finest paddling option is undoubtedly the most famous, Lake Tahoe. However, for the full Great Basin pluvial lake experience and unforgettable landscapes Mono Lake and Pyramid Lake are not to be missed. These lakes trade Tahoe’s conifer forests for tufa formations, powerboats for deserted shores, and the hustle and bustle of a resort destination for the solitude of the desert. After visiting the gold standards of pluvial lakes, one can also find forests and ospreys at Eagle Lake. Walker Lake has plentiful past lakeshores and strange military installations. Still more options exist, including the northern Goose, Abert, and Summer Lakes, as well as the Great Salt Lake that lies near the eastern border of the Great Basin. 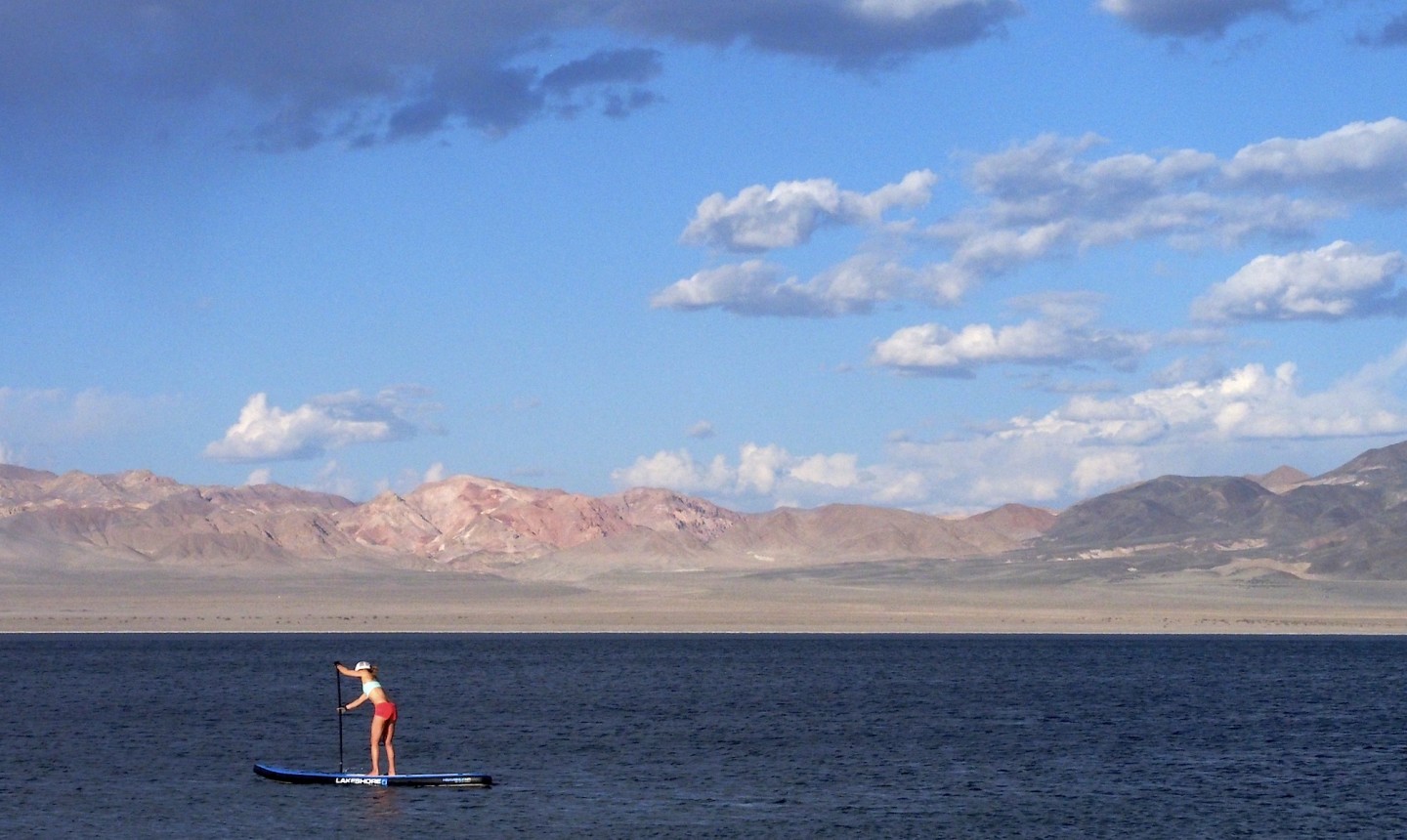 Increases in precipitation, particularly snow, over Great Basin watersheds enhances surface runoff that accumulates in the valley bottoms. This accumulation of water over time gives birth to a pluvial lake. With lower average temperatures and increased cloud cover, evaporation rates fell and larger lakes could be maintained. During oscillations in climate to warmer and drier periods, the water stored in the mountain glaciers and snowfields aided pluvial lakes against the forces of evaporation. During periods characterized by drier, warmer climates and minimal mountain glaciers, many of the lakes dried up completely within the span of several decades. This occurred as recently as 1000 years ago and demonstrates how fragile our water resources are in the ever-thirstier western U.S. When the most favorable of cool and wet times were upon the land, the massive runoff occurring in the Sierra Nevada and Wasatch Mountains caused many individual closed basins to become connected. The result was the formation of two famous megalakes, Lake Lahontan and Lake Bonneville. While Lake Tahoe is technically part of the upper Lahontan watershed, it would not be the lake it is today without the help of two million years of glaciation filling it to the natural rim with icy water. Here it overflows and feeds the Truckee River which still today links Tahoe to Pyramid Lake. During ice ages, icebergs dammed Tahoe and sent lake levels nearly 1000 feet higher. These temporary dams would then burst apart in catastrophic floods sending house-sized boulders 50 miles downstream. 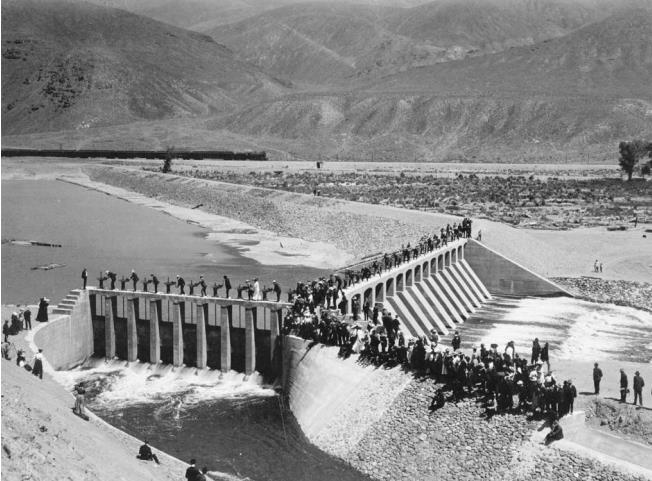 Sadly, humans have made the past 150 years particularly difficult for pluvial lakes. The first U.S. Bureau of Reclamation project, completed in 1905, constructed the Derby Dam that diverted Truckee River water bound for Pyramid Lake to the Carson River drainage for agricultural irrigation. Mono Lake was drained to near ecologically catastrophic levels by William Mulholland’s feat of engineering known as the Los Angeles Aqueduct. In 1941 it began to bring water from the Mono Lake watershed 419 miles south to Los Angeles using only gravity. Thanks to the efforts of the Mono Lake Committee in cooperation with the Los Angeles Department of Water and Power the future of the Mono Basin and Owens River are much brighter. Efforts to maintain ecologically healthy lake levels and restoring natural streamflow regimes are currently in action.

Paddling on pluvial lakes offers lessons in desert and mountain landforms. Steep, tectonically uplifted mountain ranges erode into massive, conical alluvial fans, some of which spill into the water. Ancient beaches and shorelines appear as step-like terraces cut into the hillsides and alluvial fans (see figure 5) by wave action. In the Lake Tahoe and Mono Basins, glacial moraines, alpine cirques and U-shaped valleys form portions of the western shores. An early morning start will allow you to avoid the gusty midday winds and give you the best light to observe these landscapes.

The most unique physical feature of the pluvial lake paddle experience is the tufa tower, best experienced at Mono and Pyramid Lakes. Tufas are composed of calcium carbonate and are formed by chemical reactions occurring in the lakes as well as microbial activity. Springs bubbling along the edges of these lakes are rich in dissolved chemicals such as calcium, carbon dioxide, and carbonate. As the carbon dioxide gas is lost to the air, the pH of the water increases (becomes more basic). This causes the carbonate to react with calcium and form a solid. The resultant solid occur in the form of needles, layers, and spheres, growing to upwards of 30 feet tall. The exact shape of the tufa depends primarily on the water temperature and chemical composition. Care must be taken around the ‘tufa forests’ and rogue columns. They lurk beneath the surface of the water and can surprise unwary paddlers by stopping a board in its tracks. The paddler gets to swim and the board may suffer damage. 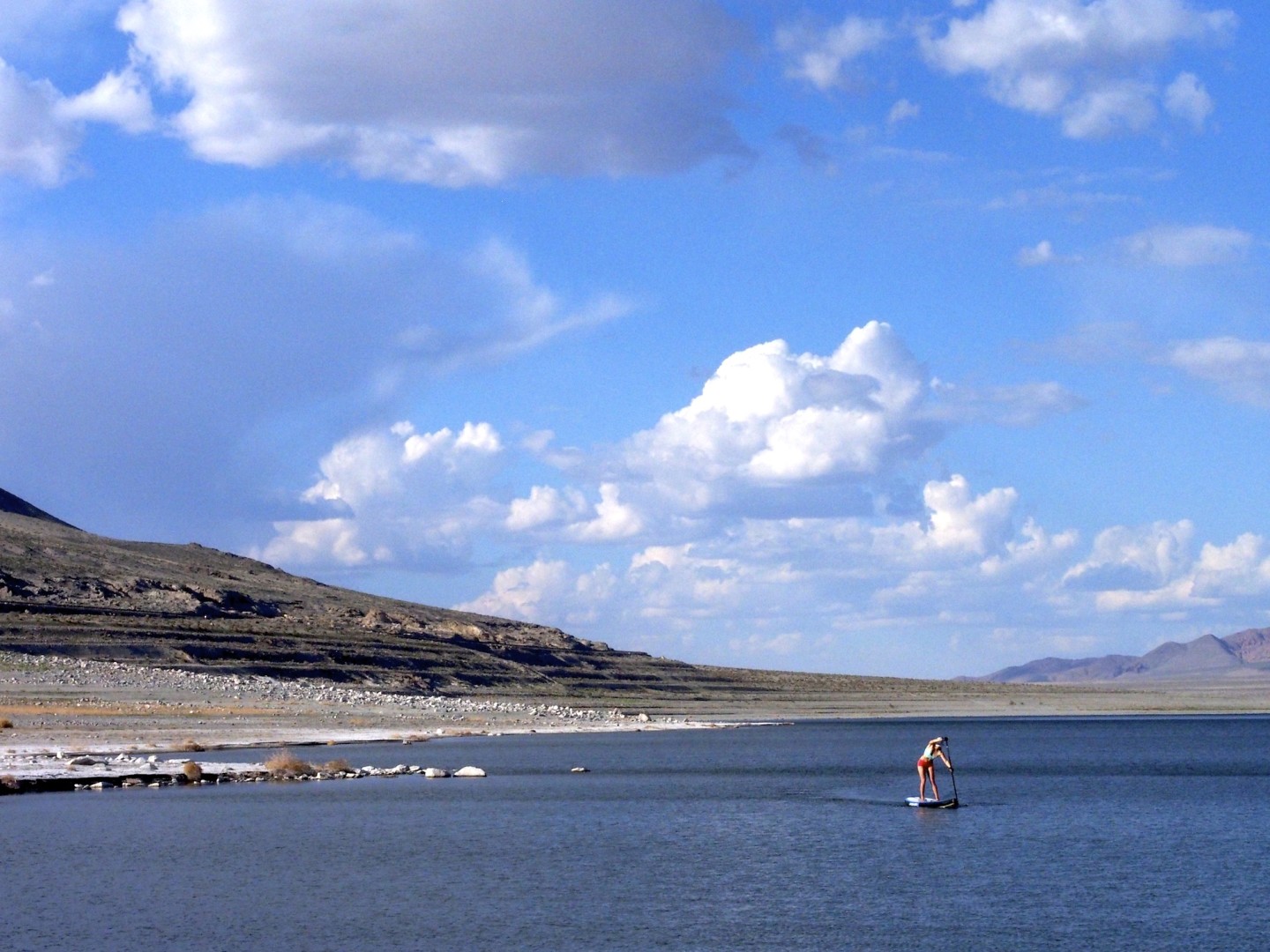 Pluvial lakes represent the hydrological pulse of the Earth’s climate system, driven by many interacting forces both on and off the planet. They are also exceedingly fun and interesting to paddle. Think of a pluvial lake as a time machine. Pluvial lakes allow us to understand the long history of change in the desert and mountain regions of the western U.S. In the past, the climate varied from periods of abundant precipitation and glaciers to droughts worse than we can imagine. Pluvial lakes show us that change is the only constant. Periods of drought or flooding capable of wrecking havoc on our modern economies are a real possibility.

Visit a pluvial lake; see their signature lakeshores cut into the hillsides, their mesmerizing tufa formations. Take home with you the lessons they teach us about the natural environment, the importance of water to our existence, and the need to respect and preserve our natural heritage. Rest assured, the pluvial lakes will rise and fall long after we have paddled their waters.