Breeze Turner is back for the fifth leg of her Tahoe tour, paddling Eldorado Beach to Baldwin Beach: 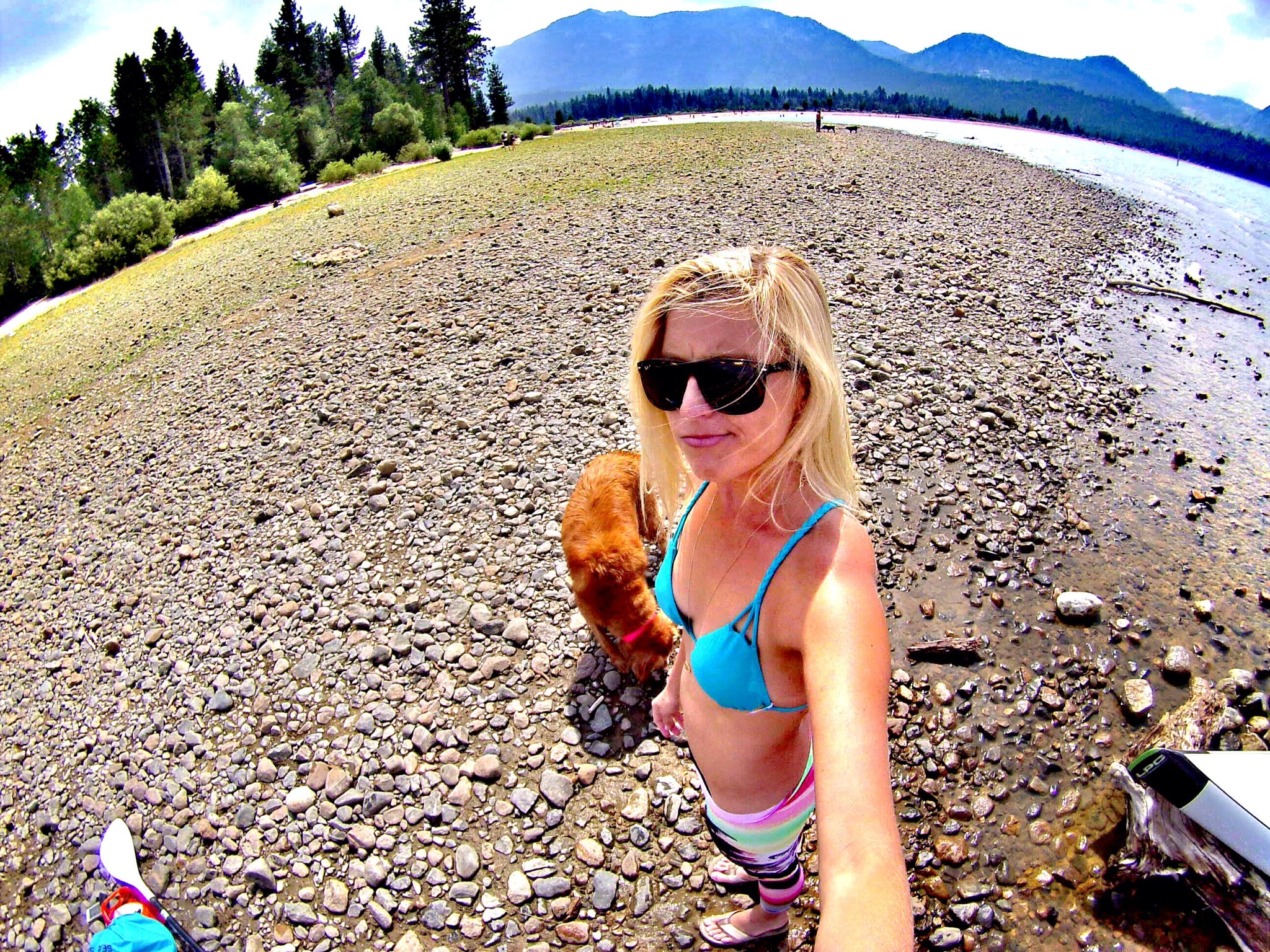 The only thing bright and sunny about our 5.5 mile paddle from Eldorado Beach to Baldwin Beach on the South Shore was the ridiculous pair of surf pants I was wearing that day to stay warm.  This leg of our journey was definitely less comfortable temperature-wise, but with no severe weather in the forecast, I knew I had better make the most of an available weekday afternoon. This time, I had the luxury of both a drop off and pick up shuttle, so I didn’t have to worry about any creative parking situations or long distance, half naked and barefoot walks through the woods.

After being dropped off at Eldorado Beach by my friend Harris (the one that rescued me at Glenbrook during my first debacle), Marley and I paddled West along the South Shore. We passed tons of swimmers, paddle boarders, kayakers, and boaters, all braving the chilly temperatures and gloomy skies.  Because we were covering extremely shallow water, we were able to spot and retrieve lots of bottles and cans from the sandy lake floor.  Marley and I began to look more and more like we had a drinking problem the more the beer cans piled up, but luckily our stability seemed to prove our sobriety (for once). 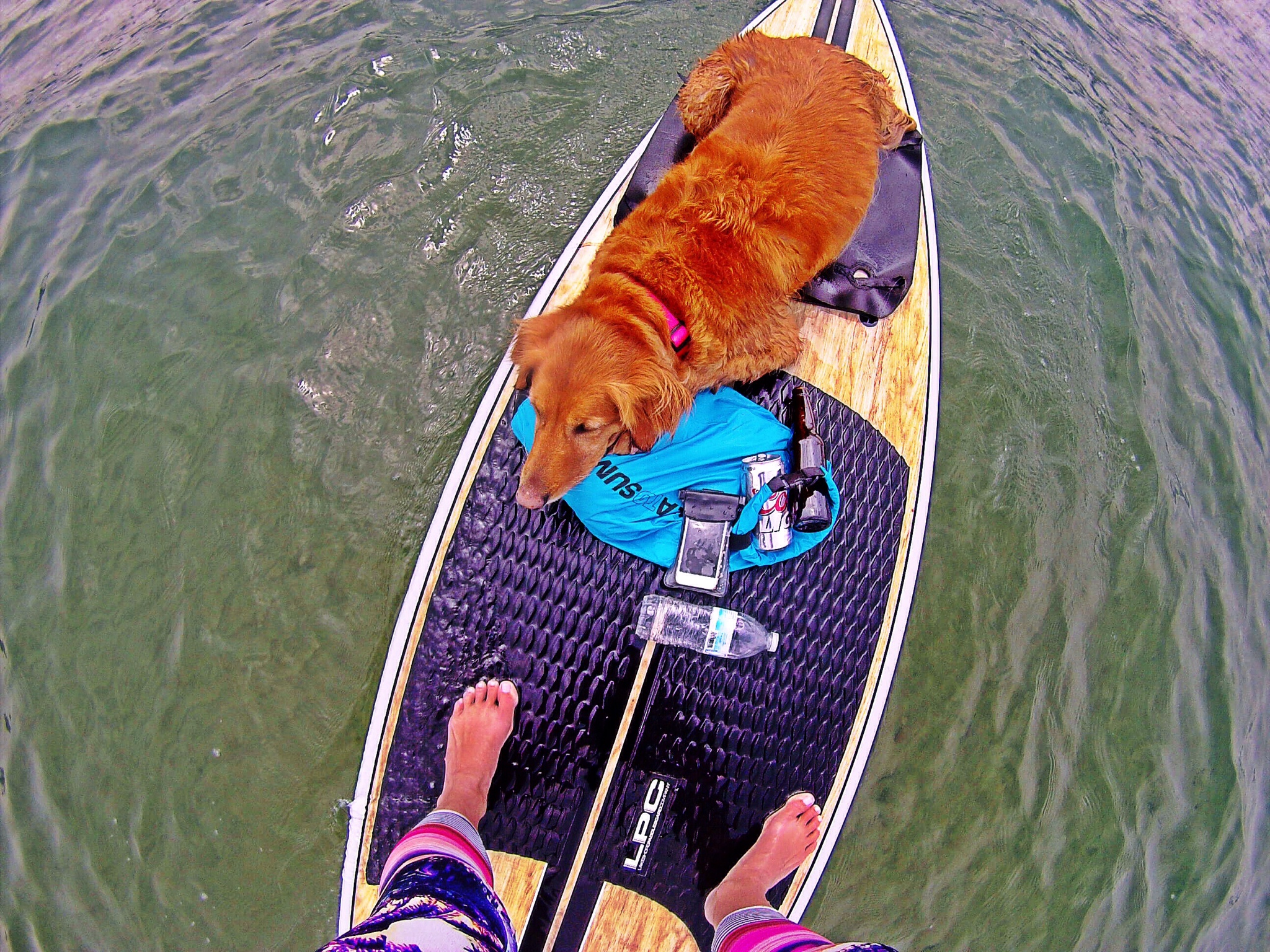 Captain Moo was much more serious about her job this trip, but oddly spent 90 percent of the paddle facing me instead of her standard forward facing, crawdad fishing position.  At first the constant staring weirded me out a little, but then I realized how insane I probably looked with my sunset and palm tree spandex pants, and understood that, like a bad car accident, she probably just couldn’t look away.

Marley and I paddled past Tahoe Keys, where we watched and waited as the boat traffic surged in and out through the canal.  Marley stared intently at each and every boat as their passengers cooed and waved at her (or my pants, we may never know) as they passed through the ‘no wake’ zone.

After that, we paddled West past the hustle and bustle of Camp Richardson where live music boomed from The Beacon Bar and Grill.   Once we made it through all the boat congestion, we came around the point to Kiva Beach, filled with happy wet dogs and lots of swimmers.  The wind had started to pick up considerably, and with just the right timing, I was actually able to catch a wave.  To my surprise, Marley seemed to enjoy it, sitting calmly in front of me as we glided into the bay.  Is it possible that some real surfing could be in our future?  We will call her “Gnarly Marley” and she will ‘hang ten’ and get ‘pitted’ (and be extra territorial of her surf spots).

After our mini wave lost its steam, we continued paddling West to Baldwin Beach, where we drifted for a while as I sat to text Harris and [First Mate] Phill to coordinate a pick up.  Since Baldwin Beach isn’t dog friendly, we decided that I would backtrack to Camp Richardson to meet them.  As I began to head back East towards Kiva Beach, I saw two teenage boys entertaining the idea of climbing one of the wood pillars just off the shore. As I approached, I asked one of the boys to jump so I could take his picture.  It took some convincing (and peer pressure from his friend) but he finally agreed.  While I doubt he will ever read this or see this photo, I was pretty excited to catch him in air and I’m grateful that he took a little leap of faith for me.

When it came to paddling back around the point where Marley and I had begun our surfing career, things got a little tricky.  With the wind and surf pounding against us, remaining stable was difficult.  As I struggled, Marley became uneasy.  The water beneath us was super shallow, and the lakebed was extra rocky and hard.  The choppy water lapped over the nose of the board as Marley stood up to readjust.  After a few hairy moments of instability, I thought we were in the clear, but as I learned with the wedding crashing incident, paddling with Marley is never that easy.

To our right, a couple stood throwing a ball for their two black labs.  As I struggled to keep Marley on the board through the waves, I noticed that they kept throwing the ball closer and closer to us.  At first, I figured it was an accident, but then, with a “watch this” head nod to his girlfriend, the guy planted the ball right next to us, causing Marley to leap off the board, which then caused me to land firmly (and painfully) on the rocky lake floor less than a foot below us. 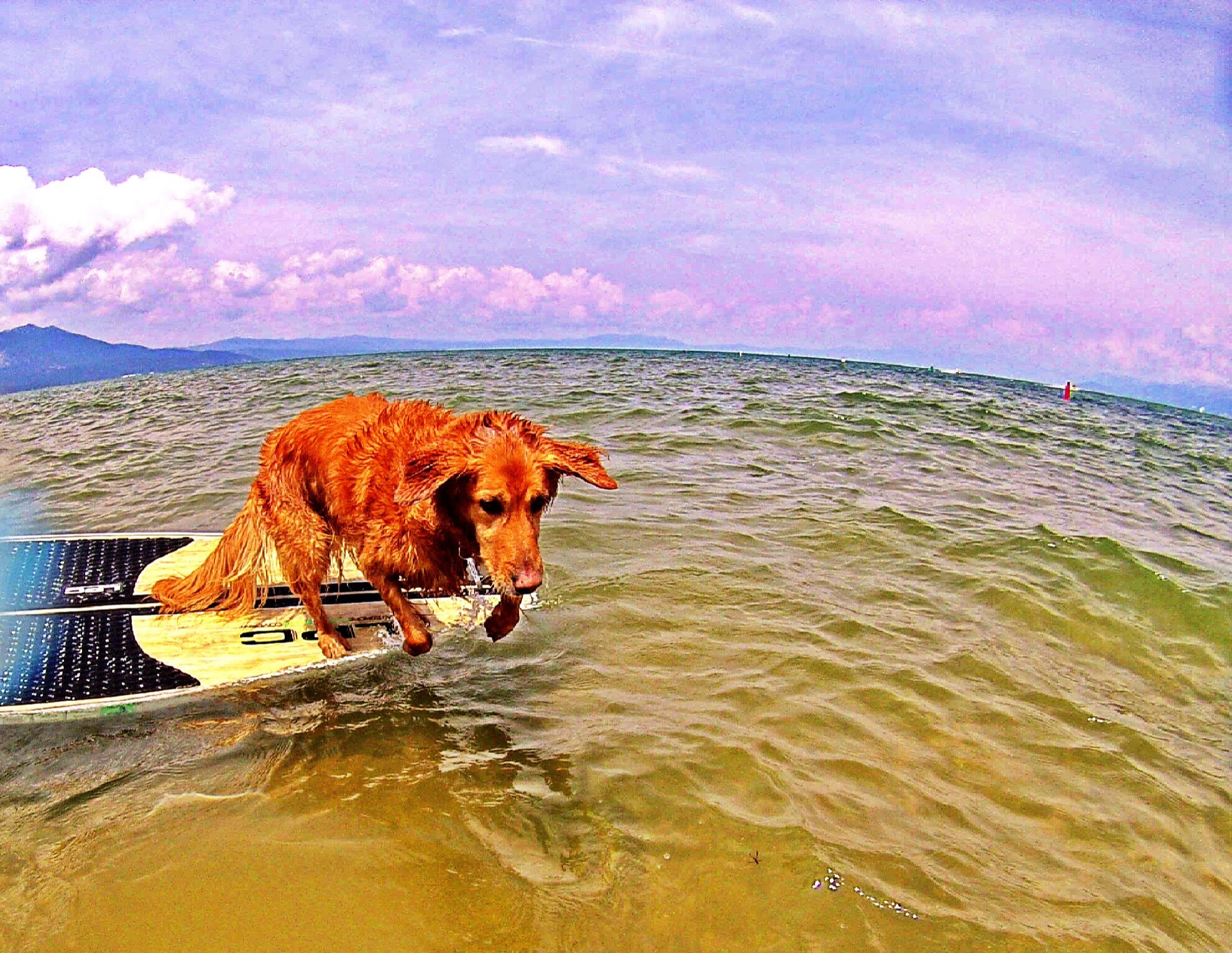 At this point I was already pretty irritated, but it wasn’t until I looked up to see Marley on the beach, taking the biggest poop of her life, that my usual non-confrontational nature took a slight back burner.  I grabbed my board and all the trash I had collected and stomped (stumbled barefoot, really) onto the beach to collect my dog and her generous contribution.  I took a second to look over to give an obligatory and well-deserved dirty look to the jerk with the tennis ball, but he was busy acting like he didn’t notice me and my temper tantrum.  As if I wasn’t already flustered enough, the only poop bag I had ended up having a hole in the bottom.  The thought crossed my mind to leave the poop behind, but the pile of collected trash on my board was a reminder of how many times I shook my head at other people’s laziness and disrespect, so I decided not to be a hypocrite.

After regrouping and letting my anxiety reduce, I set off again, heading East, with dog and poop in tow.  It wasn’t long before we paddled past the big dock at Camp Richardson and saw Harris and Phill waiting for us.  We paddled right up to the beach and exited the water through a small boat launch.  With a ‘thank you’ wave to the dock employees that were probably supposed to be protecting the vicinity from pirates like us, we loaded up and were on our way.  I haven’t worn the psychedelic surf pants since, but I do somehow still have the tan lines around my ankles to prove their existence.