“Cloudy With a Chance of Electrocution” is the title of the next chapter in Breeze Turner’s adventure around Lake Tahoe:

My first attempt to paddle the second leg of our trip was rained out.  A severe weather front seemed to hover over the Sierras for a week or so, making getting out on the water a challenge.  After driving up the hill to Tahoe and seeing the impending doom of approaching thunderstorms from the West, it became apparent that getting on the water would be far too precarious.  Instead, a friend and I decided to scope out a new beach spot and headed just North of Zephyr Cove to a secluded stretch of shoreline.  After a 15 minute walk that may or may not have included a fair amount of [accidental] trespassing, we made it to the water’s edge and stumbled upon a shelter made of driftwood and built into gigantic boulders.  As clouds rolled in and the water darkened, we sat on the boulders and watched the Sheriff’s boat herd boaters off the lake. 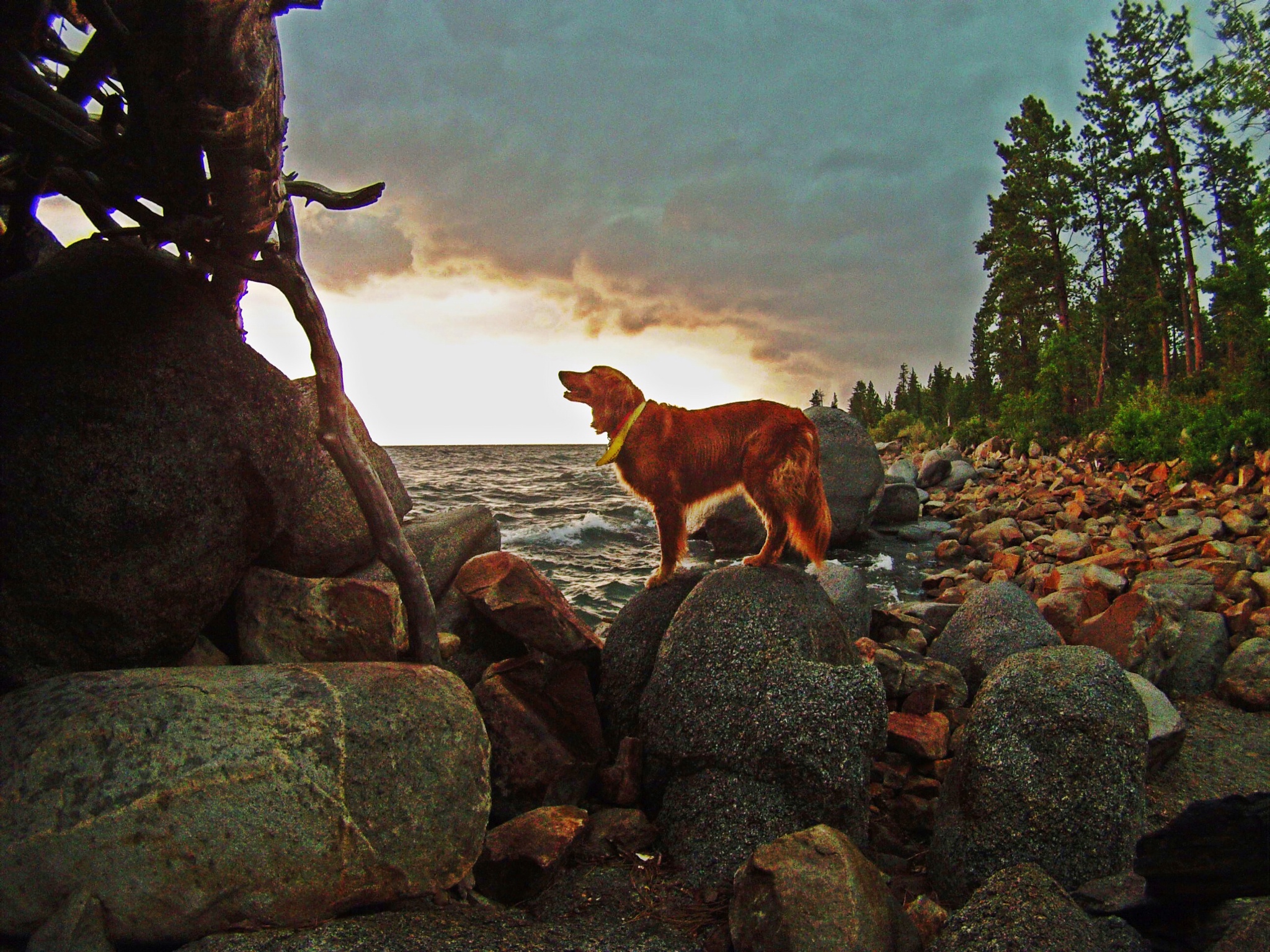 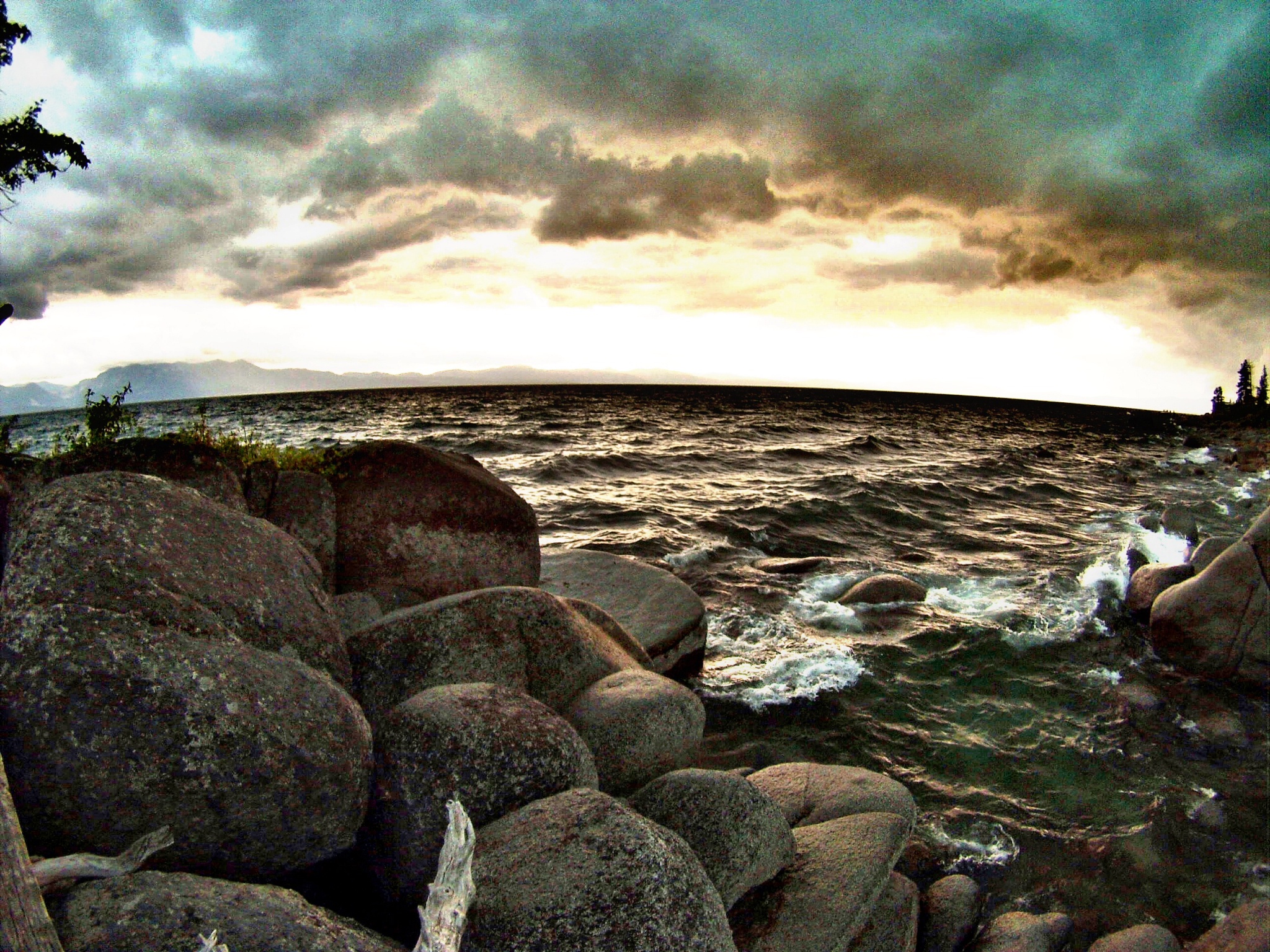 Within minutes it was raining, and we made the decision to seek shelter in our newly discovered driftwood hideout.  At this point we really didn’t expect much more than some big raindrops, and we lightheartedly watched the waves lapping over the shoreline as we listened to music on our iPhones.  Minutes after retreating to our shelter, we started seeing the beginning of what became an incredible lightening show.  We set up the GoPro on a .5 second time lapse and waited.  As the storm got closer, the time from lightning strike to thunder boom became shorter and shorter, and we realized we were in it for the long haul.  Having grown up in the Caribbean, I’ve been through my fair share of hurricanes and tropical storms, but never have I been exposed to the elements in this way.  When we noticed the lightning strikes getting closer, we removed anything conductive (including Marley’s collar) and wedged ourselves even further into the boulders.  I have since read an article about how to NOT get struck by lightning and realized that we handled our adventure that day 99 percent incorrectly, but you live and you learn and what an experience it was!   Mom, please don’t be mad.

When the scary part of the storm seemed to have made its way past us and the rain had subdued, we emerged from our hiding spot and made our way to my car.  Word for the wise: if you buy roof racks to schlep around your paddle boards, buy ones specifically designed for your vehicle.  The intense and constant rain that day made my car feel like an unsealed submarine.  We eventually made it back to my friend’s house safely, with a thrilling adventure under our belts and a handful of incredible photos to share with the non-believers. 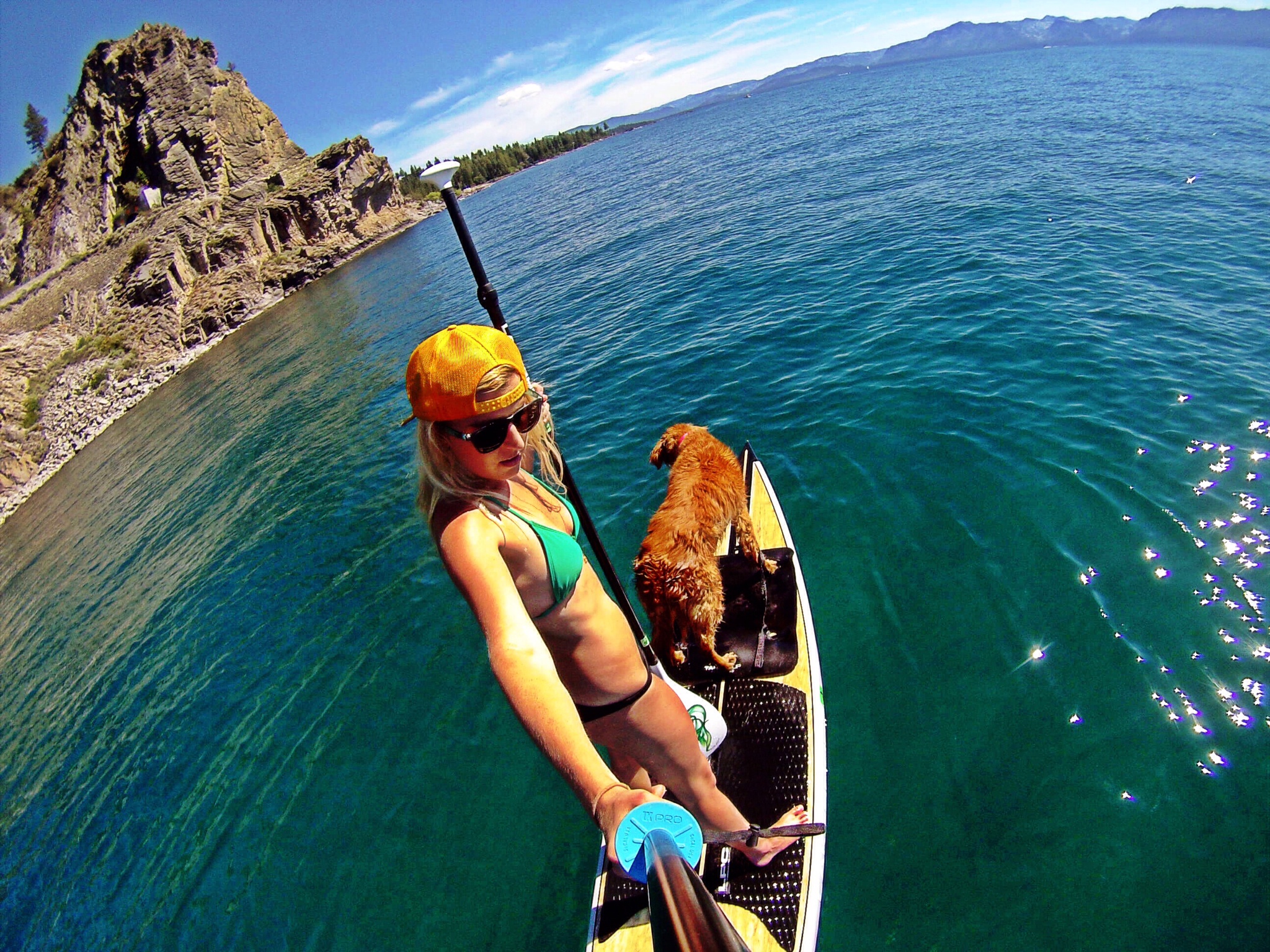 With much clearer skies in the forecast and a better idea of what I was doing, Marley and I set out on our second leg. This trip was 8 miles, but only 4 miles counted towards our circumnavigation. Since I knew accessing Glenbrook again would be a long shot, I paid the 8 bucks for a day pass at the Cave Rock boat launch and smuggled Marley past the “No dogs on beach” signs as the nice park attendant turned a blind eye. We paddled North through the boat traffic of Cave Rock, back up to Glenbrook and then we backtracked South to our initial launch point. We had a headwind heading North, but we were able to keep up with a couple of fishermen trolling for fish nearby. Although they didn’t seem to catch anything, we offered them a different level of entertainment when Marley decided to abandon ship and flip us 3 times in less than 20 minutes. Our total time for the 8 mile trip was just over 3 hours and this time we made it out of the water looking much more like seasoned pros and much less like defeated, water-logged castaways. 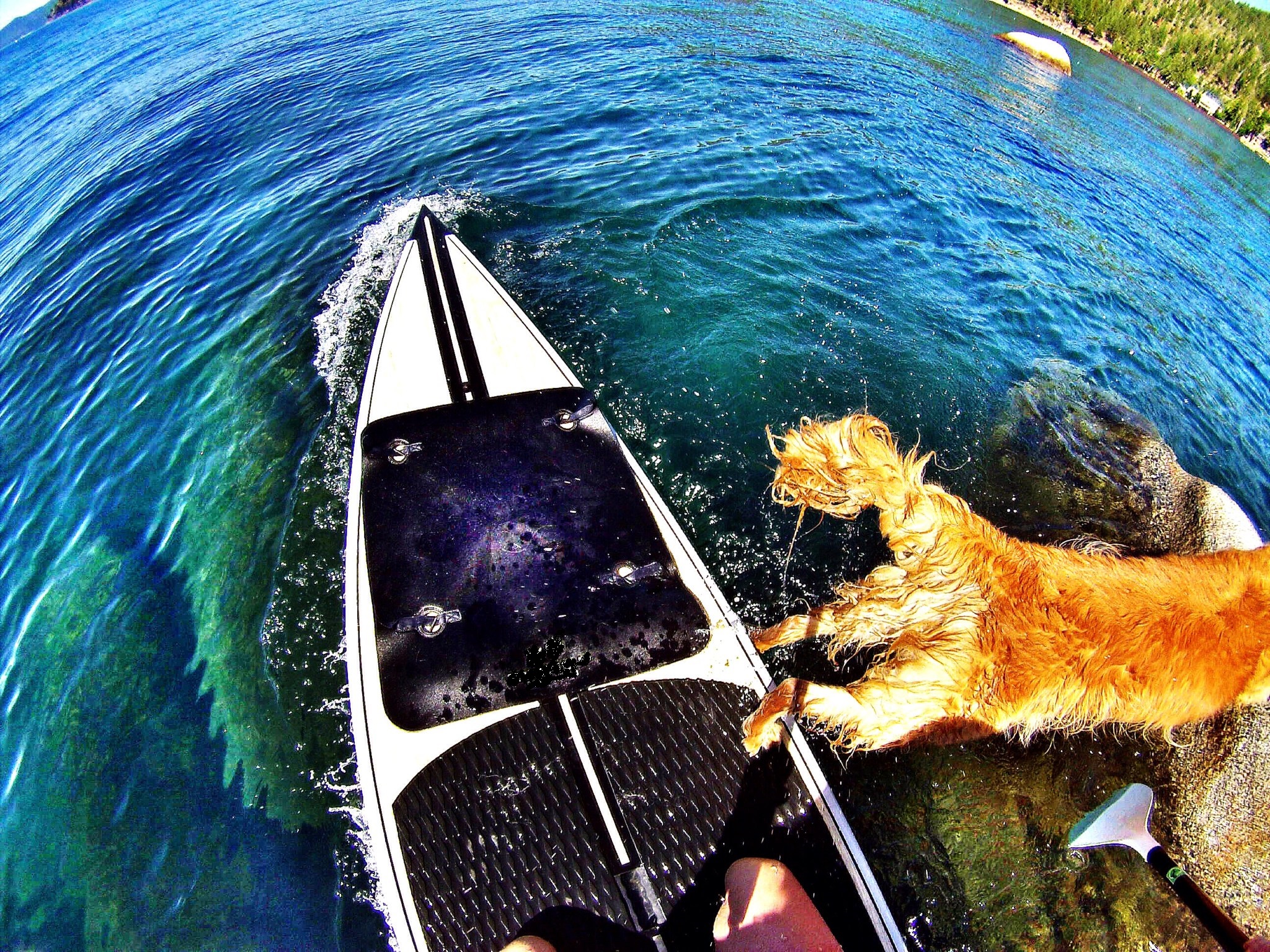 Click a link below if you missed any part of the story:
LEG 1